This post was contributed by Ana Maria Grigore, an Intern from HKU’s Social Venture Management course. 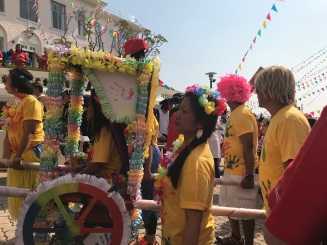 Happiness… freedom… joy… these would be the ideal words to describe the wonderful Sunday morning on the Peak at Matilda International Hospital where the annual Sedan Chair Race was held. On this day people from all parts of Hong Kong gathered to support lesser-known charitable organisations, by taking part in the Sedan Chair Charities Fund Race and Bazaar.

As a partner of the Fund, Twopresents was delighted to participate.

Imagine this: it’s around half past nine on a Sunday morning. You are walking towards the main entrance of the event. Hundreds of colourful flags fly against the backdrop of a sunny bright blue sky and the beautiful view of everything that surrounds Victoria Peak. An infectious energy surrounds you as the shouts of contestants dressed in dazzling costumes mingle with the laughter of children. There is excitement everywhere: among the contestants dressed as pirates, unicorns, dinosaurs, flamenco dancers and even Pokémons and in the eyes of family members and supporters eager to cheer them on. 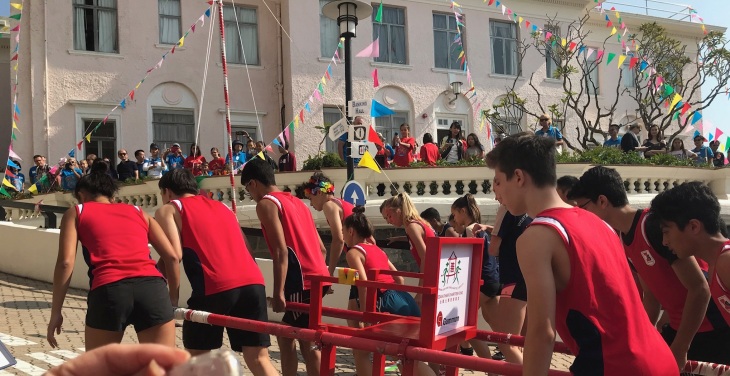 The race is ready to begin! 3…2…1…Start! All the teams are raring to go. They run as fast as they can, the pirates scream, the dinosaurs roar and the energy level is at a maximum as each team takes off carrying their decorated sedan chair. After a couple of minutes, there is a sudden silence around. Everyone goes to different viewing points to get a glimpse of the finish line. The tension builds.. who will be the winner? Supporters are nervously waiting on every corner, turning their head from side to side with the desire to spot their favourite team approaching. And here they are! The first team! And then the second. And then all of them one after another. From a distance you can see that they are barely moving forward… no more running, just walking… But as they approach, they summon up their last drops of energy and start to run faster and faster, encouraged by the view of the finish line and the sound of people cheering from all corners. When they finish the race there is an immense sense of satisfaction and team spirit. People laughing, hugging, clapping hands and contestants congratulating rivals from other teams…

After the race, celebrations began on stage at the Bazaar. Kids dancing, bands playing, people singing…all combined to create a beautiful atmosphere for everyone around. There were food stalls where people could choose a tasty meal or even treat themselves to a delicious ice cream. The Bazaar also featured booths providing activities for kids including, T-shirt design, fishing, foosball and a turn on a bouncy slide – all for a small donation to the Fund. 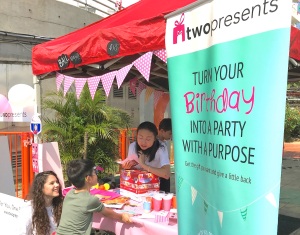 The Twopresents stall with colourful balloons and a photo booth, was there to spread the message about sharing and giving back to our community. Using a ping pong ball game, linked to questions about the plight of many in need, we were able to educate kids about how sharing a little of what we have can make a big difference. It is our hope that families walked away with the message that every celebration can be made more meaningful by sharing with a worthy cause.

In what seemed like a blink of an eye, the bazaar started to wind down. There was a peaceful silence around and all that was left behind were beautiful memories, the money raised for those in need and the wind waving the colourful flags. What a beautiful day and a beautiful way to make the world a better place!

Twopresents is an online party invitation and fundraising platform. Send your invitations through the Twopresents website and let your guests know that instead of bringing gifts they have the option to contribute towards your gift/charity fund. One portion of the collected amount gets donated to your favourite charity and the other goes to you to buy a BIG present! It's an easy way to make a difference. To share your celebration, visit www.twopresents.com to get started. View all posts by Twopresents 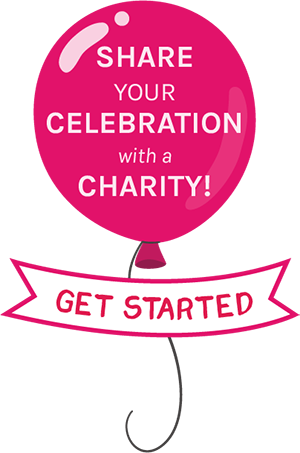